May 2013: There is currently an exhibition of Rachael Magowan’s fine art photographic work at The World Peace Café in the Vairochana Kadampa Buddhist Centre in Chorlton, South Manchester. The installation titled ‘Love, Peace and Petals,’ features 19 images from the natural world and from the arena of the performing arts, which are selected to reflect inspiration taken from nature as well as the joy of creativity. The exhibition was launched as part of the Chorlton Arts Festival events for the centre, and is a long-term installation.
Further examples of Rachael’s work can also be publicly viewed at The Bar, Chorlton, where several portraits produced in partnership with Manchester digital artist Peter Topping are on permanent display throughout the venue. An additional image is on premanent display in the Chorlton branch of Morrison’s supermarket.

February 2013: Four of Rachael’s photographs have been selected by developers McCarthy and Stone for inclusion in the brochure advertising their new retirement complex Cosgrove Hall Court, Chorlton in Manchester. http://www.housingcare.org/housing-care/facility-info-158642-cosgrove-hall-court-chorlton-cum-hardy-england.aspx The photos are in the section illustrating the surrounding area and depict the local meadows, water park village green and library. 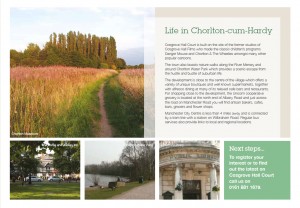